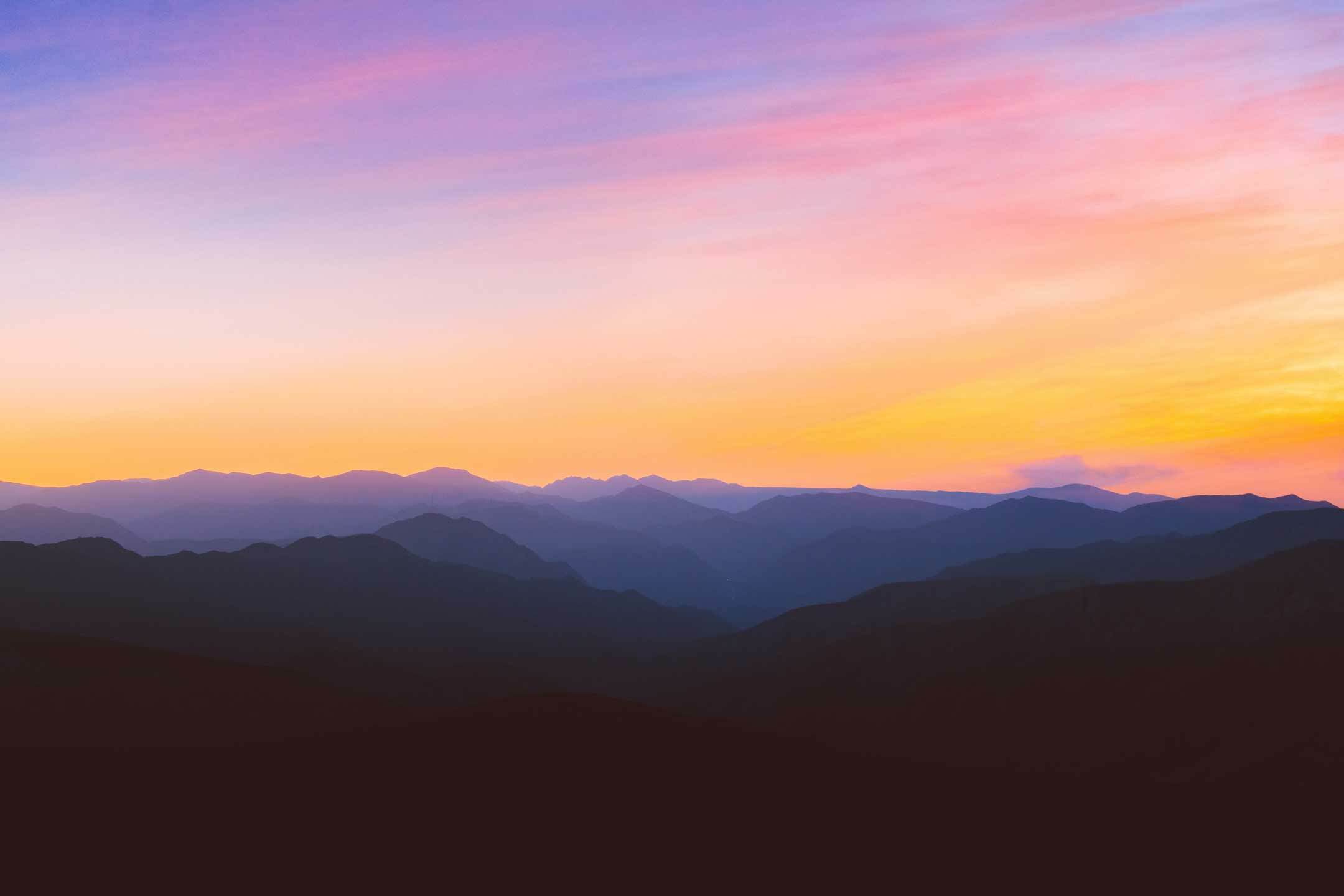 Is it time to look at value investing again?

Is it time to look at value investing again?

Just as markets move in cycles, investment styles go in and out of favour. Both in the domestic and global markets, the last 5 years have seen strong outperformance by growth and momentum styles of investing. So we pose the question, is it time to look at value investing again?

Why have growth stocks continued to rally?

This has been driven by a combination of factors such as a generally lower level of earnings growth in the post-GFC environment on the back of subdued economic growth and ultra-low interest rates.

Taking each in turn, in an environment where growth has been harder to find, it’s not surprising that investors are willing to pay more for those stocks which are perceived to offer a higher level of growth. This is especially the case where that growth is perceived to be delivered with a high degree of certainty.

Moving to the current global interest rate settings, with very low official cash rates and quantitative easing, this has had a distorting effect on valuations. When borrowing costs are extremely low, the time value of money becomes less important. As a result, people are prepared to pay more today for cash flows which are further away.

This has manifested itself in the high valuations of growth stocks, where people will pay a lot today for earnings which might (or might not) be delivered in the distant future. Similarly, the valuations of assets such as infrastructure, with very long-dated cash flows have also been bid up to higher levels.

Where are we now?

According to Deutsche Bank and based on the MSCI, value stocks in the Australian market are at a 35 per cent discount to growth stocks, a gap which is more than double the historical average.

That’s a relative and not an absolute valuation but there’s other more absolute evidence that Australia’s most keenly sought industrial stocks, which by implication are mostly growth stocks, have been running pretty hard.

Deutsche research notes that if you take out resource stocks from the ASX100 index, the top quintile (top fifth) of stocks are trading on a prospective P/E that is 40 per cent above its average  level since 2003, at more than 28 times compared with a historic average prospective P/E of around 20 times. If we use CSL as a case study, this is a stock which has historically traded at a healthy premium of 50% to the overall market, reflecting its strong growth prospects. In other words, based on history, with the market currently trading on a forecast P/E of 14.5x, CSL would reasonably be expected to trade on a multiple of around 22x. However, as a result of the recent re-rating of growth stocks, CSL is currently trading on a P/E of 32x, or a premium of 120% to the market. By contrast, the bottom quintile (bottom fifth) of stocks are trading at only around a 5% premium to their long-term average. 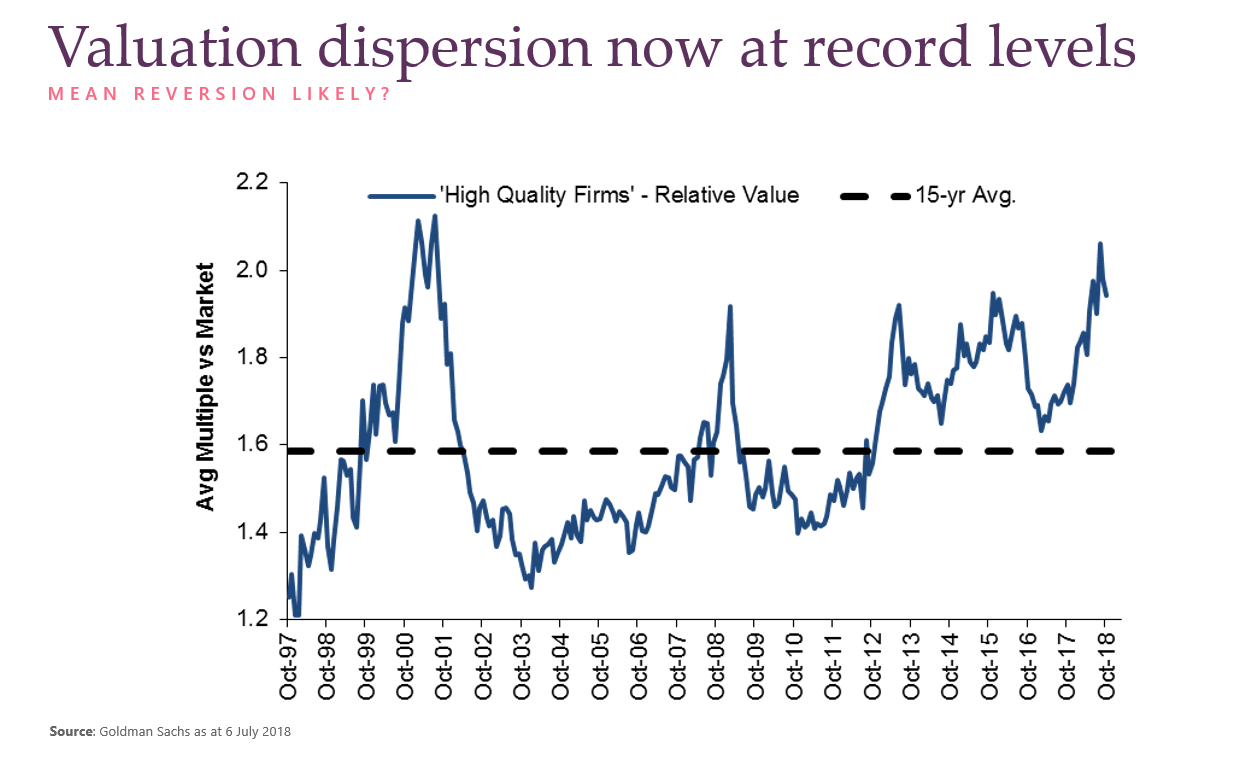 This divergence, which has really opened up dramatically over the past 12-18 months, is now at levels which have only rarely been seen in the past. On each previous occasion, when valuation divergences have reached this level, there has been a reversion – often an aggressive one – towards cheap value stocks and away from expensive growth stocks.

This occurred after the dot-com boom in the early 2000’s and again after the GFC in the late 2000’s. In both instances, solid and stable value companies outperformed significantly as the former market darling growth stocks – be they failed dot-com stocks in the tech wreck, or over-geared financial engineers in the credit crisis – fell from grace.

Perennial has delivered significant alpha at these points 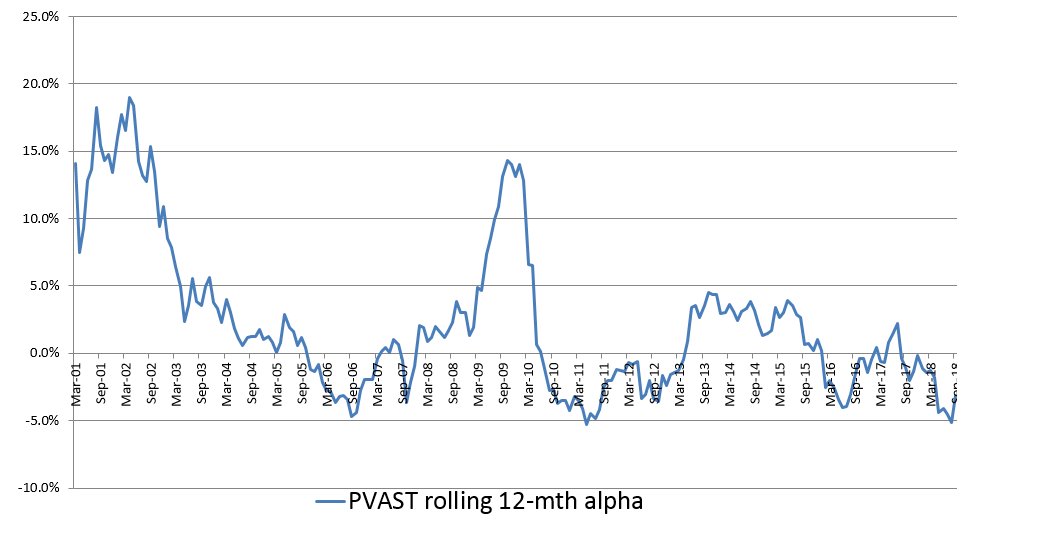 Source: Perennial Value. Past performance is not a reliable indication of future performance.

While it is impossible to predict when and why markets will correct, history tells us that they inevitably do. Although every new situation is different, it’s worth remembering that while history doesn’t always repeat exactly, it usually rhymes.

If we look at the factors which have driven the outperformance of growth and momentum in recent years, it seems that the tide may be turning. Despite the pervasive political uncertainty, global economic growth is strong and interest rates are rising.

With a generally improving earnings growth outlook meaning there are more places to find growth to invest in and rising interest rates meaning money is no longer free, the conditions for value to outperform could be near.

So for an investor who’s had a great time riding the boom in growth stocks, it might be worth taking time to pause, reflect on what a great run they’ve had over the last couple of years, consider the chart below and ponder whether it’s time to lock in some gains and reallocate some of their portfolio towards value.